In 2008, I was first introduced to the concept of a “disappearing wall” when viewing Toll Brothers’ “Legends” community in Yorba Linda. In their flagship model called the Ironwood, visitors entering the front door were given the ultimate first impression: an outdoor courtyard with multiple entrances to the home and a guest suite.

With many features and decor outside that were usually associated with indoor spaces, the transition between going outdoors to indoors was seamless. Upon further inspection, I realized the large openings to the courtyard were accordion-type doors that folded against the frame.

Later designs such as the smaller homes in The Preserve and carriage-style homes in Heritage featured similar doors facing the backyard. 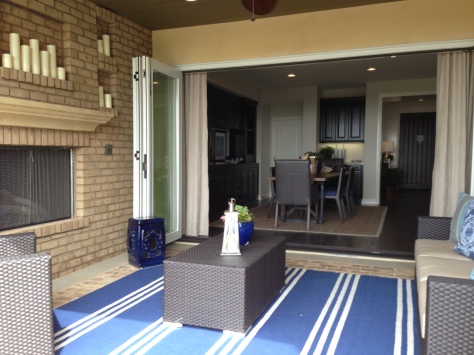 The effect on a room is dramatic. Although the designs of Avenida and the Preserve were around 2,400 square feet, family room spaces felt much larger due to the door’s ability to instantly make the backyard part of the room.

In the master-planned community of Blackstone, Shea’s Coral Ridge Community takes full advantage of the their views with the panoramic door feature available in their Plans 1 & 2.

Although it’s considered an option, Standard Pacific looks to be building every home in the Avenida community with this feature.

From what I’m told from multiple sources, the entire frame design is affected by this feature and must be incorporated in the construction in the very beginning. Once the frame goes up, it’s too late to add the feature.

Many existing homeowners who were interested in adding this feature quickly ended the fantasy once they heard the price tag: over $25,000 due to the structural changes needed to a home.